Ansel Adams, The Tetons and the Snake River, 1942

In order to get an impression of the diversity of the ideas that are impacting upon today's view of the relationship between people and nature, it is worth examining the archive of visual culture.

We will start our journey with images of the origins of nature, address aspects of the relationship between city and country and show how “untouched” nature has been depicted in landscape painting and how humans, as observers, are always “in the picture” and we will visit parks, in order to witness how these “negotiate” social relationships.

In doing so, we will touch upon questions of the relationship between images of nature and “natural beauty” and discover that landscape painting is a powerful medium, which is capable of visualising and, hence, sensualising such abstract ideas as sublimeness, emotions or gender roles.

The Garden Eden
The origin of a differentiation 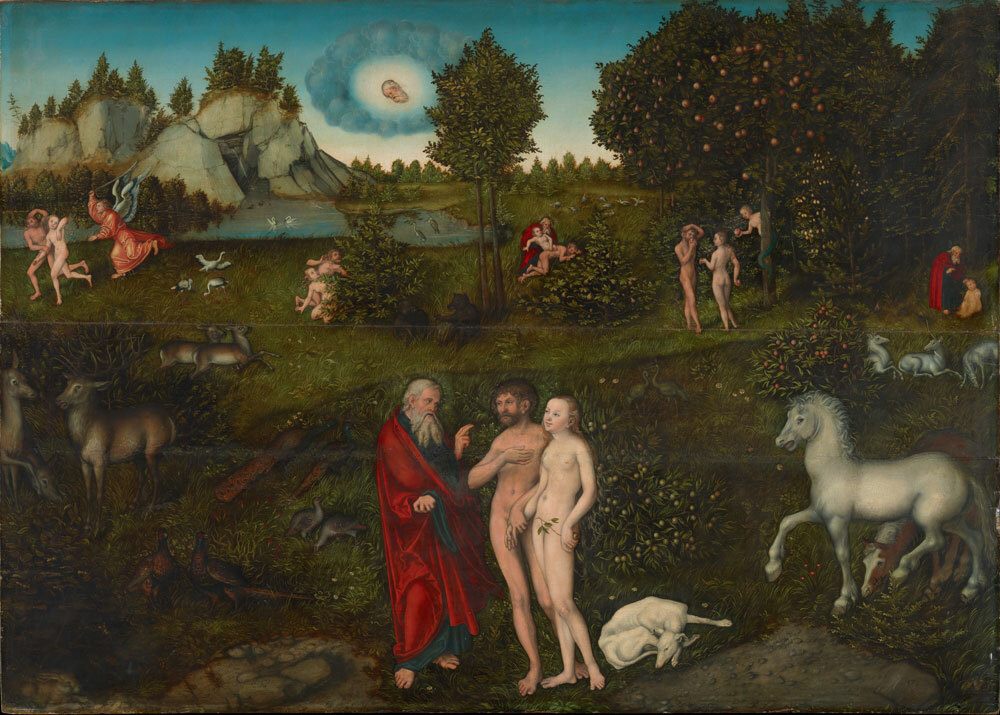 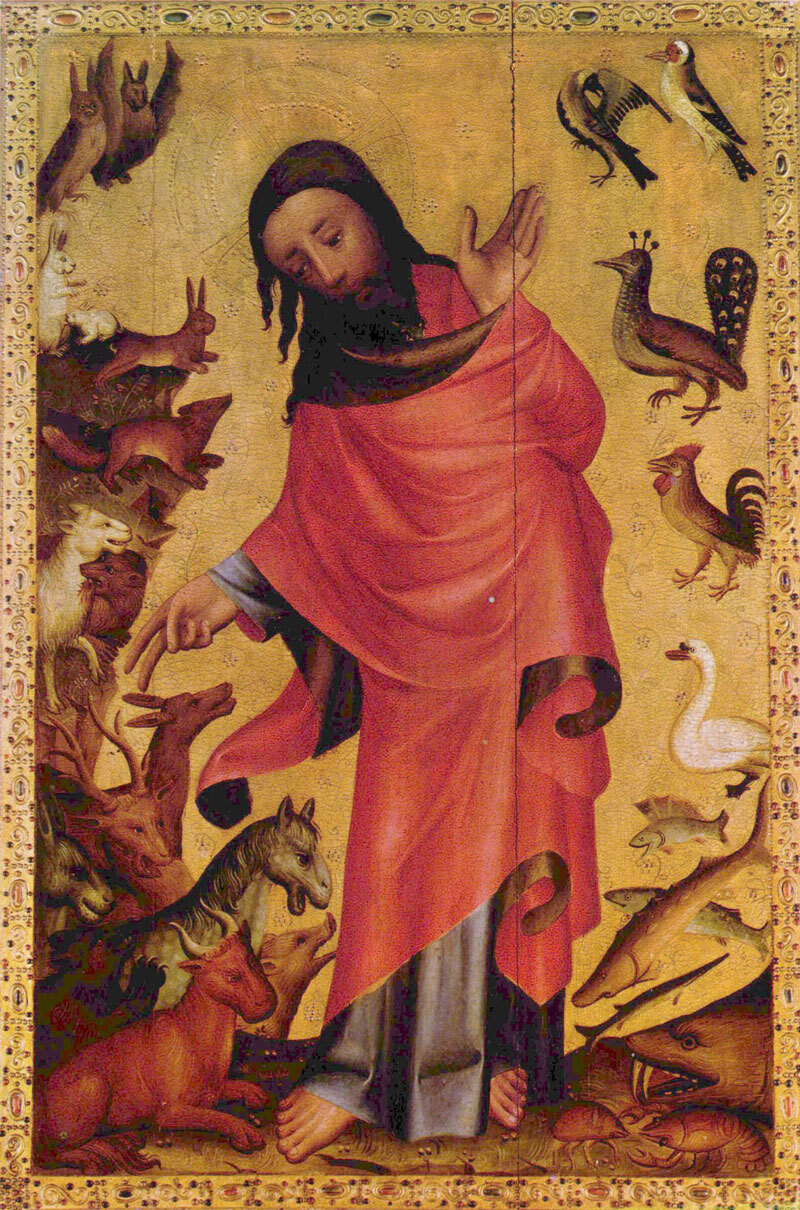 According to the creation myth of the Old Testament, God created the world in six days. Even at a very early stage, paintings were used as a means of giving visible form to these words of faith. The wing of the Petri Altar (fig. 2) depicts God during the act of creation, surrounded by a bustling mass of animals that live on the land, in the water and in the air. Apart from a tiny piece of earth that provides the Creator and these land animals some ground upon which to stand, the painting is set against a monochrome golden background, which represents both the water and the ether. The reference in the painting to the origins of nature is realised symbolically in line with the imagination of the viewer. The natural environment is represented in the painting as an abstract “field of colour”. It is notable that human form has been used to represent another unrepresentable quality, the Divine.

Almost 200 years later, Lucas Cranach the Elder presents us with the Garden of Eden as a landscape painting (fig. 1), in which nature becomes the setting for the bible story. The fictional landscape is full of rich greenery and, in the background, a rocky outcrop can be seen beyond a small pond. Groups of animals are placed between the trees and bushes, the space is clearly structured and tapers towards the rear to create the illusion of “three-dimensionality”. Great attention is paid to the representation of natural phenomena, each blade of grass is executed in great detail and suggests “realism”. Upon closer examination, however, this intense depiction of nature doesn’t show us a nature that emanates from the singularity of the outward appearances of the individual elements but, rather, a standardised form of nature, a typical “tree”, a generalised human image, etc. It is thus no surprise that, with the help of these “characteristic appearances”, the painter simultaneously visualises all episodes, from the creation of humanity to the expulsion from paradise, against the same natural background.

The city
The opposite of nature? 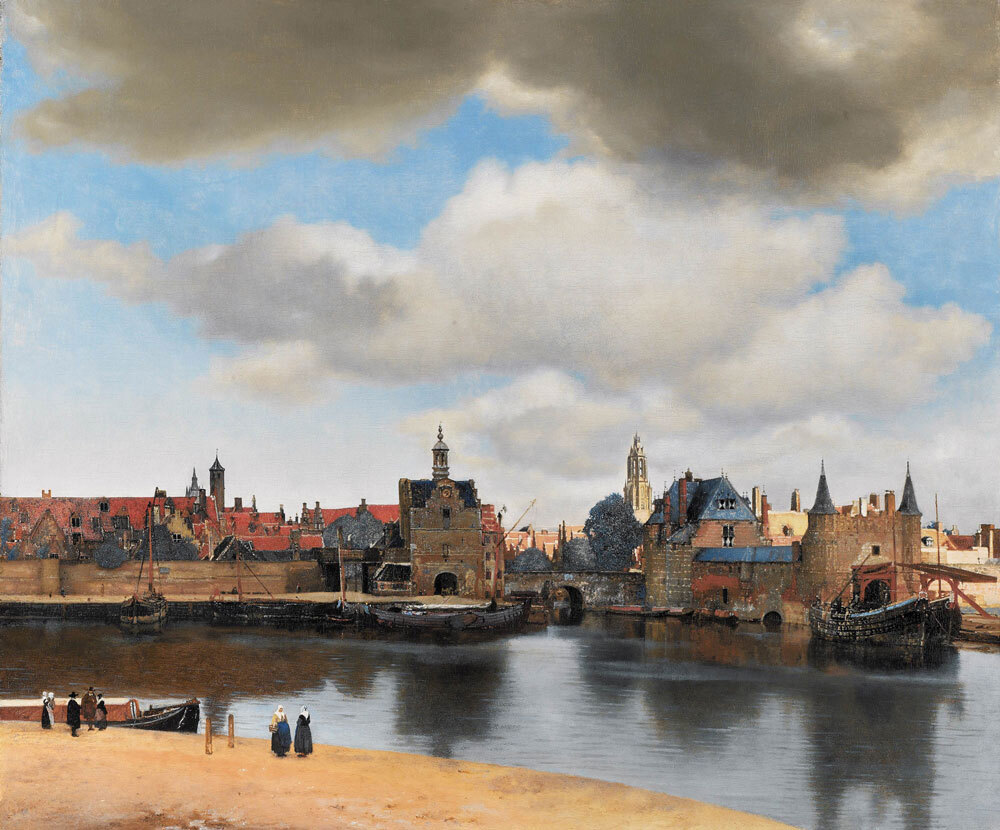 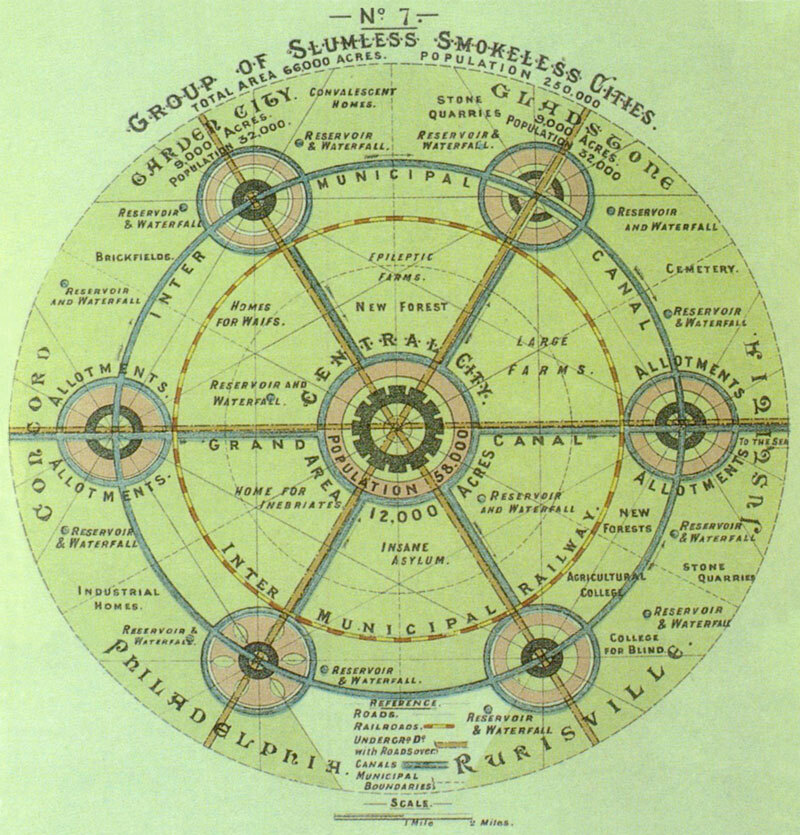 In an early perspective attributed to Piero della Francesca, the “ideal city” is an invented place that completely belongs to architecture (fig. 3). The city is the sphere of human culture that, during the Renaissance, rediscovers the achievements of antiquity and ensures that these have a defining influence upon architecture for centuries. This image of the city, the heart of which is occupied by a circular temple around which rows of buildings are laid out in a grid, is confronted by a tiny natural element that appears at the end of the right-hand row of buildings. The ideal city is sharply differentiated from nature, which clearly plays the role of the “other”.

In contrast with this, the view of Delft by Jan Vermeer (fig. 4) shows us a tangled, medieval urban structure, in which greenery also finds its place in the form of individual trees within the city walls. The phenomena of nature, light and shadow, the reflections and movements of the waves on the water and weathering effects on buildings are all depicted in the painting. City and country are exposed to nature in similar ways. Although the painting shows a typical view with its characteristic “skyline”, it also reveals the present appearance, the concrete city in all its physical and temporal reality. Cultural forms are also integrated into the process of natural transformation.

In the 20th century, the English town planner Ebenezer Howard attempts to abolish this contrast between the city and the country. With his concept of the “Garden City” (fig. 5) he creates the vision of a city in the landscape (town country) in which greenery becomes part of the notion of the town. “A number of towns are arranged in rings around a core city and connected by transport routes in the form of a star” (Wikipedia). The centre of each city consists of a “Central Park”, in which cultural facilities and shops are to be found. The residential districts are framed by a green ring, beyond which there is an industrial zone. There is no clearly defined border between city and country, city and country are woven into each other.

The view of nature 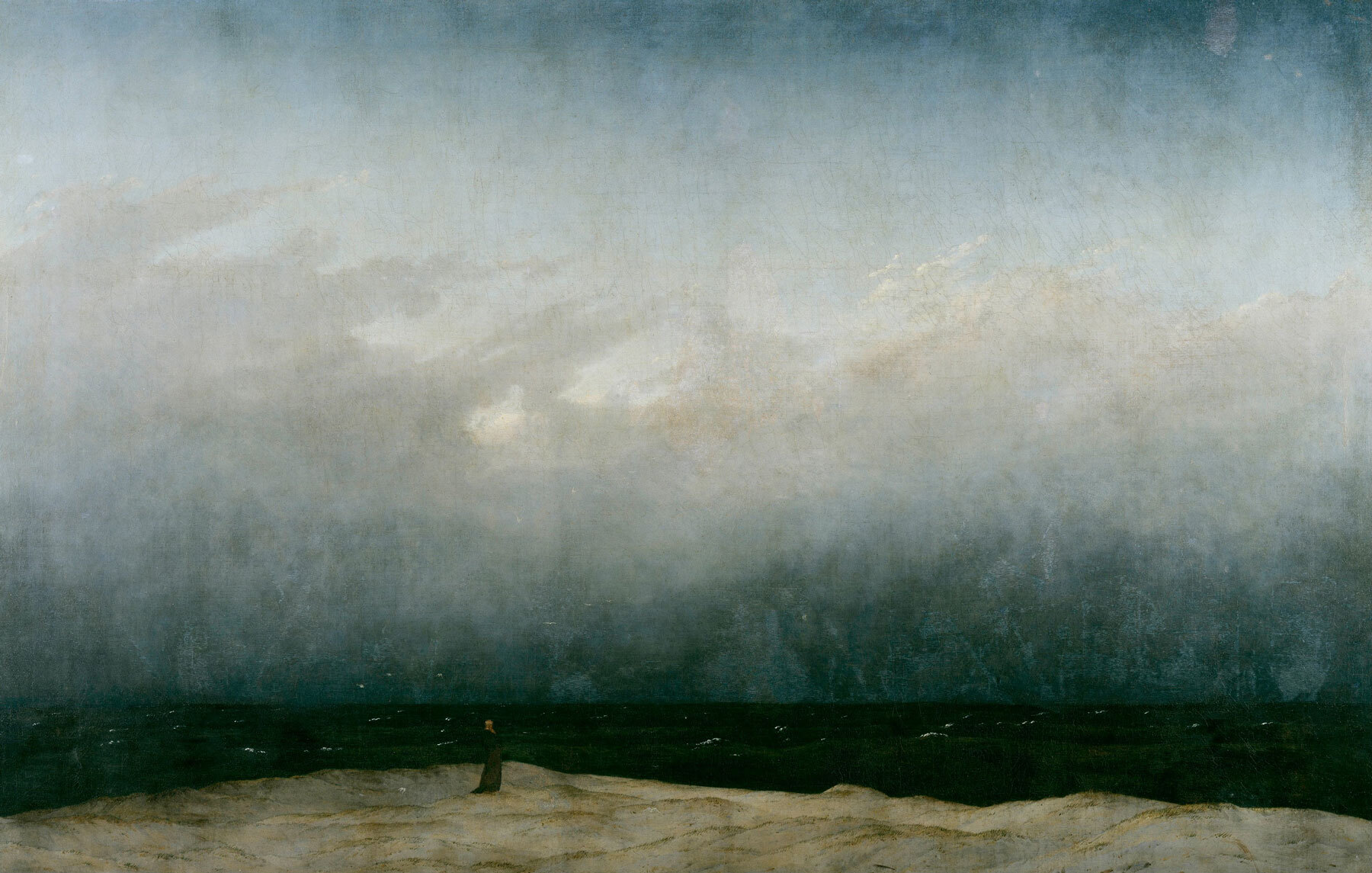 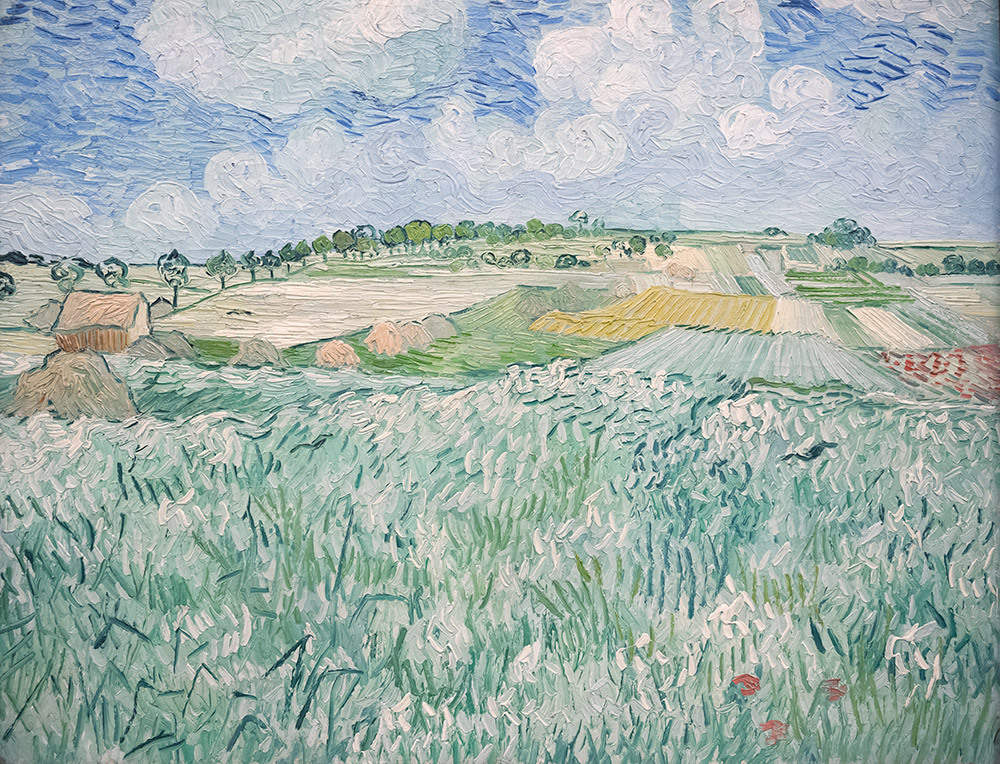 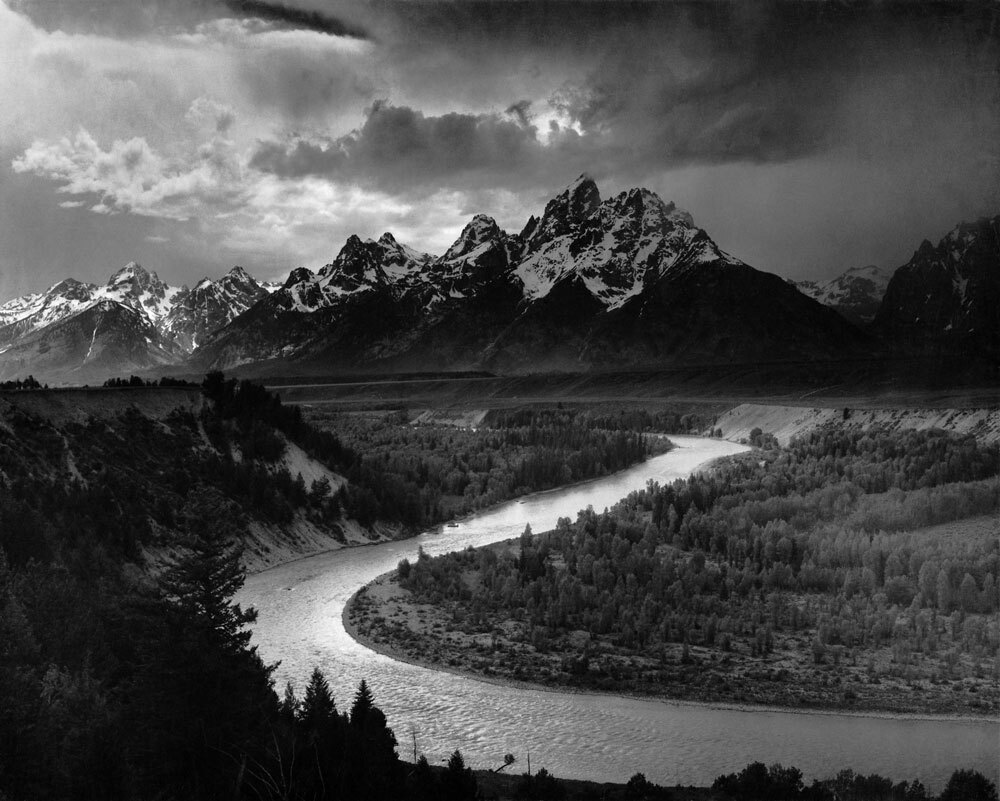 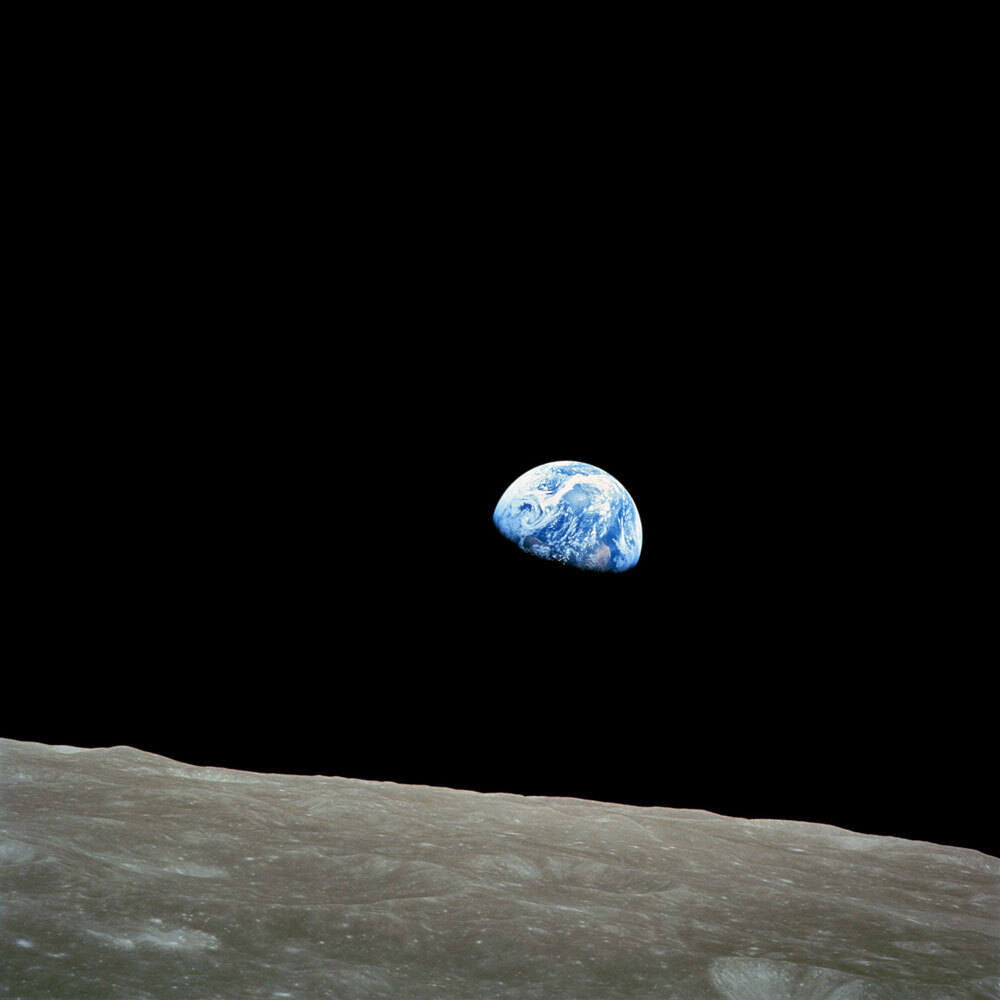 A tiny figure gazes out onto the open sea while, above the horizon, the sky occupies more than 3/4 of the surface of the painting (fig. 6). Although the perspective of the viewer suggests that the figure in the painting is far away, separated from the viewer by a vast space, this space remains as good as empty, and the edge of the canvas also gives no hint that the immeasurable enormity of nature can ever find an end. Melancholy spreads far and wide. The painting oscillates between the infinite depth of the frame and the almost formless flatness of the three defining areas, beach, water and sky.
C. D. Friedrich incorporates the individual into the painting, the lonely figure confronting a nature that exceeds his ability to perceive it, leaving him to simply submit to its sublimity.

While it is difficult to take in the breadth of the fields in the painting of a landscape near Auvers (fig. 7), the countless strokes of the brush, which remain clearly visible on the canvas, covering it with a dynamic “all-over” effect, capture the view and involve it playfully in the composition. No longer drawing us through a “window” into another world, this is a view that remains confined to the surface of the painting. The painting clearly demonstrates its own composition and the parameters of its creation as a means of questioning the relationship between the painting and its motif. What does “depiction” mean? Can this be associated with a demand for truth? The requirement that painting should reproduce nature as authentically as possible (and establish a form of relative similarity), which has dominated since Alberti, is being questioned by the Modern. What is the relationship between the flat object that we look at on the wall of a museum and the motif to which it refers? Is the painting really a “window” on the world?

This question of the merit of iconic paintings has become even more pointed ever since photography and technically produced pictures have become part of the debate about the image. In analogue photography, the imaging process is based on physical (light) and chemical processes (fixing) that suggest that the result is a “true” image of nature (which is a key reason why it took so long for photography to be accepted as an art form). And yet the distinction that was already implied in painting can be similarly applied to photography: the image can be differentiated from “natural beauty” due to its pictorial quality, to its “iconic difference” (G. Boehm), to the fact that it is limited and that its inner elements come together to create a single whole. By definition, a painting of a landscape is distinct from the landscape itself. This separation is overcome by the artist, with the brush or with a piece of technical equipment. The artistic act generates an image, produces a picture of the world, in which the conditions of its production are inscribed.

The fundamental influence of this question of the perspective of the viewer on the image perhaps becomes clearer when one considers the example of the famous photograph of the Earth from the moon (fig. 9). By characterising the Earth as the “Blue Planet”, this photo altered the collective understanding of our planet by not only acknowledging its beauty, but also unleashing a rhetorical energy that calls us to place our own existence in a, literally, global context.

A social place
in a green setting 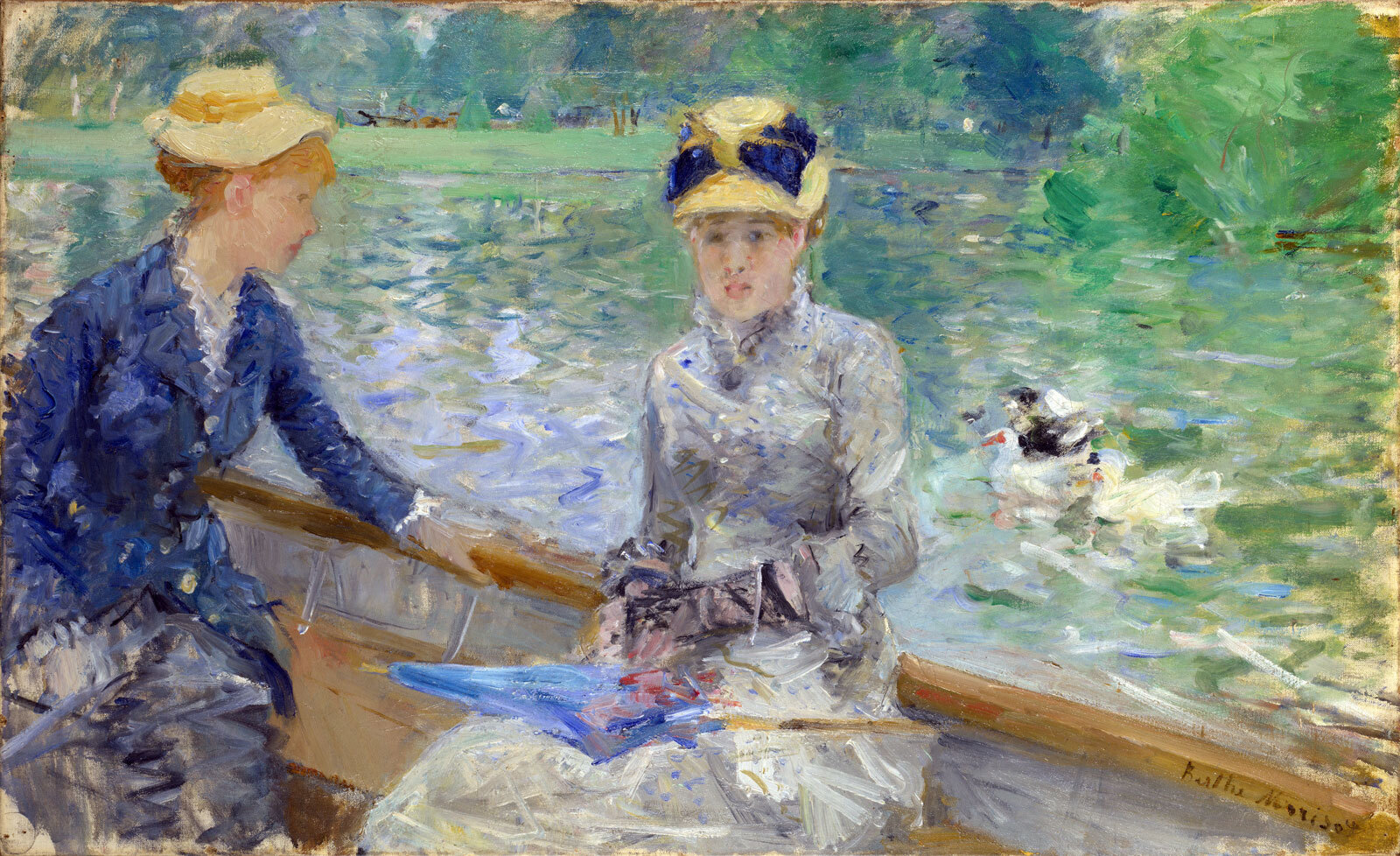 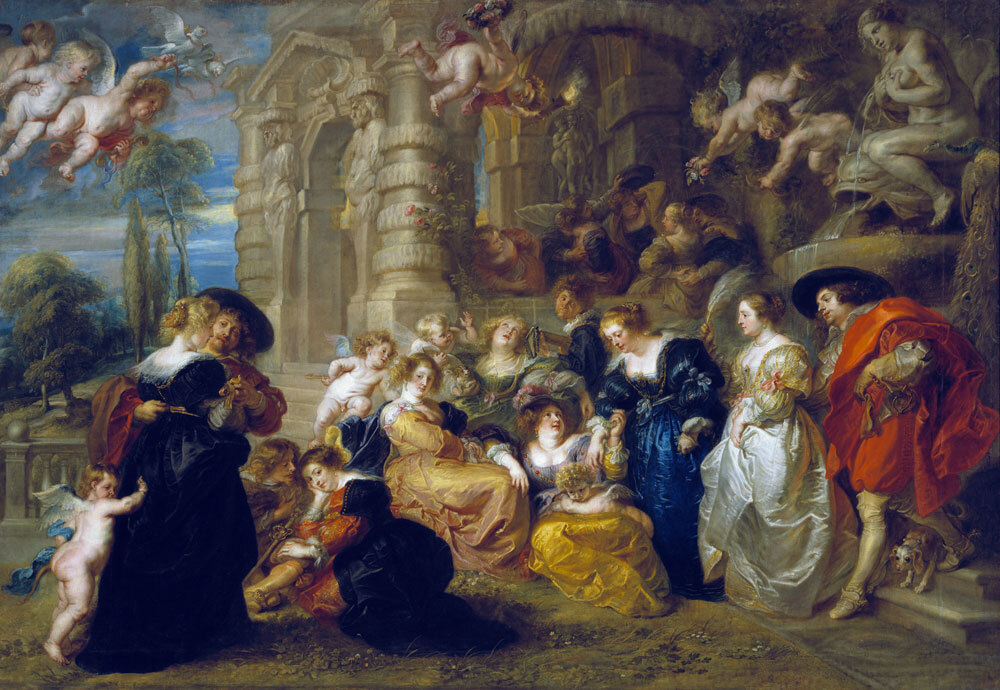 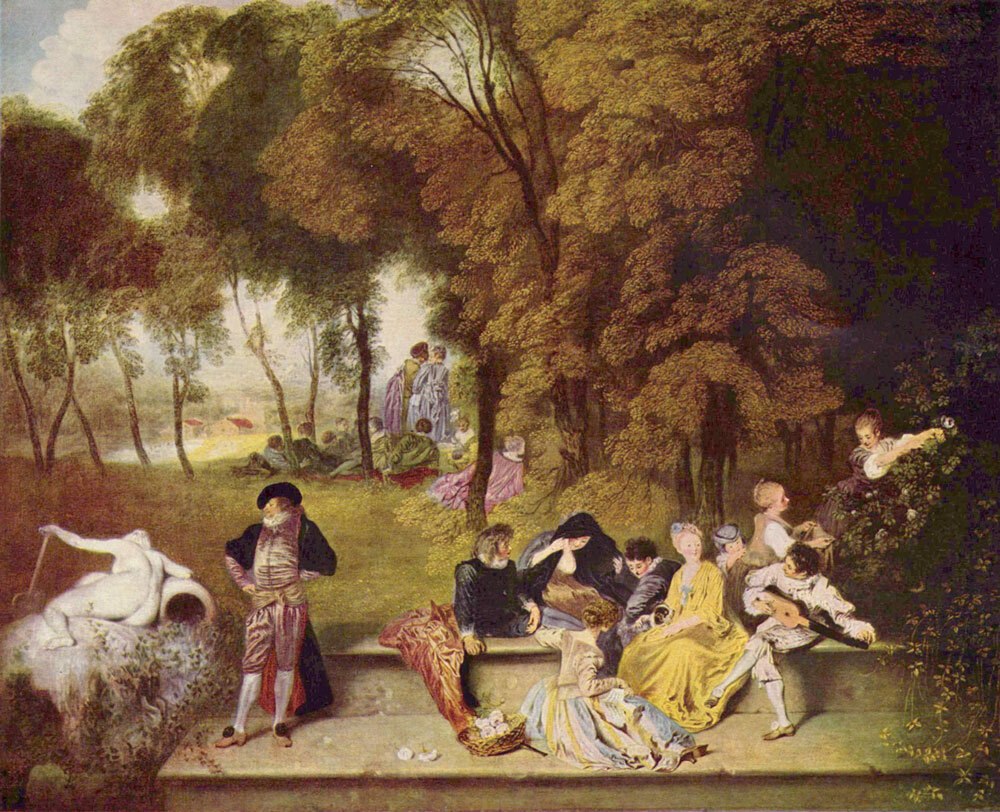 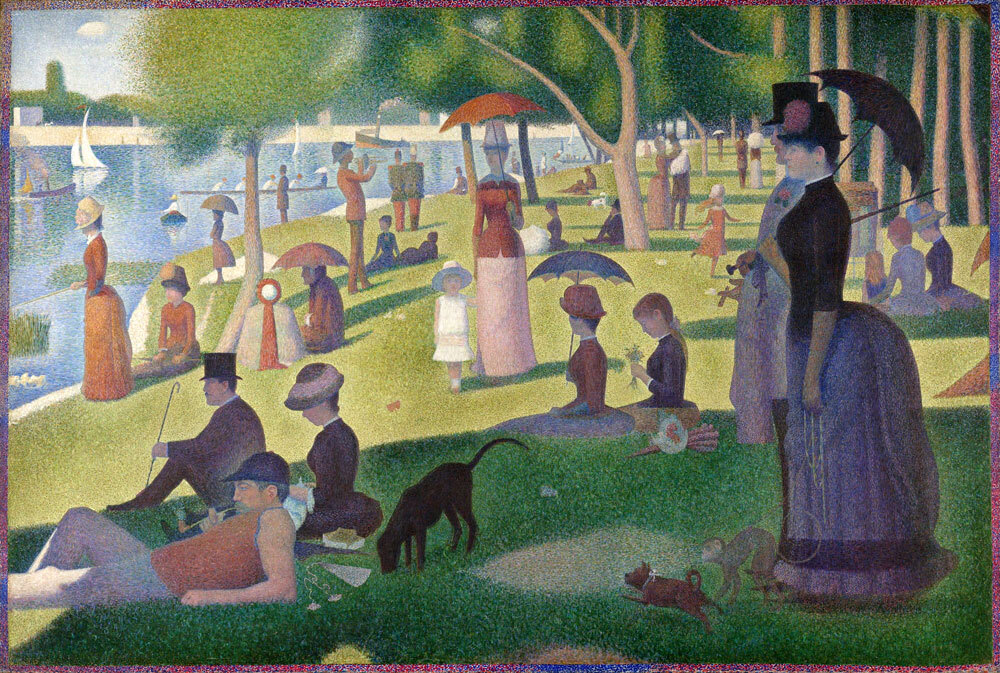 Humans are cultivated beings. They shape their environment with their actions, and as these become routine, customs and traditions develop, which influence our social coexistence and repeatedly re-establish our relationship with nature.

In “The Garden of Love” by Peter Paul Rubens (fig. 11), whiling away time with romantic games in the grounds of their castles is the reserve of courtly society. The gathering in the garden is taking place in a setting drawn from antiquity, while the painting depicts a conversation rendered conspicuously more dramatic by billowing garments and dynamic brushwork. The garden is a place of permissiveness and bustle, in which people get closer to their animal nature. And all this occurs against the background of the cultural heritage of antiquity and of the myths in which these human actions are embedded. In the image, the numerous putti hint at this fact by sharing the space with the contemporary figures in such a natural way.

The scene portrayed in Watteau’s “Fêtes galantes” (fig. 12) is no less romantic. More space is given over to nature. The huge park provides a contrast with the tight, dirty city and the “enjoyment of nature” continues to occur in the context of cultivated nature. Towards the end of the rococo, nature is stylised as a romantic place of longing and the park is the pars pro toto representation of the “wild” and undesigned counterpart to the courtly manners that are shaped by rules and conventions.

In Georges Seurat’s painting “La Grande Jatte” (fig. 13), nature is already available to more of the population. People meet on an island in the Seine in order to escape the hot temperatures of the city, to go for a walk or to simply relax on the grass but, above all, the popular destination is a social place. A place of leisure where one can see and be seen. The painting technique also addresses the process of seeing: The entire canvas is covered with tiny coloured dots in pure colours, which only come together to form a “picture” when seen from a certain distance.

In addition to the social contrast between the layers of society, the above-mentioned paintings also depict a typically male-dominated sharing of roles between men and women, as well as the resulting balance of power.

In the painting “Summer’s Day” (1879) by Berthe Morisot (fig. 10), the artist focusses on two young women, who are sitting in a boat and enjoying the nature. It is unclear if the pair are enjoying their afternoon alone or if someone is accompanying them (and what role is being played by the viewer). The mere fact that they, in this case, require no male accompaniment in order to be pictured shows us another view of gender roles. Furthermore, the women are not mere “pictorial objects” but, rather, subjects, who are taking a look at nature or turning their attention to their vis-à-vis.

The sketchy painting technique underlines the authority of the individual. It is with this fleeting, subjective impression of natural phenomena that the female artist challenges century-old artistic conventions.